Mykonos. The Greek isle has quite the reputation as a luxury party destination. Does it live up to the hype? The island can offer a wide range of experiences, depending on your preferences.

Looking to party like European royalty? Mykonos has you covered. Relaxation or a romantic retreat? Check. An action-packed LGBT-friendly getaway? Check. Looking for land, sea or cultural experiences? Mykonos has plenty. Ancient history? Sure. Family-friendly resorts? It’s not Mykonos’ strong suit, but it’s doable on the island.

The island offers a variety of experiences to meet everyone’s needs, but travelers should be aware of the island’s nuances to make the most of your next vacation. After having spent a fair amount of time at work and leisure on Mykonos in the past year, I have accumulated a few high points that every traveler should know before the trip.

1.  Mykonos operates seasonally.
Thinking of hitting Mykonos in the off-season?  Like many islands, Mykonos essentially operates May through (early) October. Its year-round population is only about 10,000; yet with the addition of seasonal workers coming from mainland Greece and tourists, its “population” can exceed 100,000 in the summer. Why is this important? Hotels and businesses close down over the winter; repairs and renovations often take place over the winter and seasonal workers return to the mainland. That means that opening weeks for the season can be a little rough. While you might find hot deals on hotels, don’t be prepared to experience Mykonos fully if you travel in late April or early May as hotels, restaurants, and shops slowly begin to open their doors. You might be disappointed when your hotel room isn’t what was promised in the booking.  Also, rain is more likely in the spring.

Bottom line:  If you want the ‘full’ Mykonos experience – particularly the party atmosphere, go during the summer high season. You’ll just pay more. If you’d like more peace and quiet – and are looking to save money, wait until mid to late September. The weather may be a bit cooler, but the hotels will operate much more effectively by the end of the season. 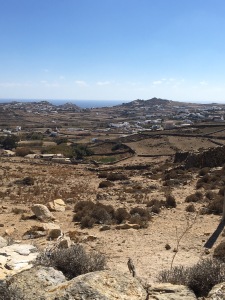 2. Mykonos is (essentially) a desert island
If you envision lush green Mediterranean hills that you’ve seen in a few magazine spreads depicting Greece, know that it isn’t representative of Mykonos. Mykonos is an arid, rocky, and windswept island. On the windward northwest side of the island near the Faros (lighthouse), it’s easy to imagine Homer’s Odyssey and his ship being derailed by the sirens in a rocky pass. Plan on wind being your constant companion, especially in the spring and fall (there’s a reason why high season is high summer). Rain comes mostly in the early spring, and thunderstorms are rare but possible.

Looking to enjoy the great outdoors?  Stick to the beach or sea, or explore the island by car or open-air Jeep.  Hiking and more traditional outdoor activities are less prevalent than water sports or relaxing by the pool or beaches. While Mykonos is relatively rocky and dry, it has numerous beaches. Water can be quite chilly, so you may wish to lie in the sun. The island’s tour groups operate a number of sailboats and motor craft, as well as ferries to other islands. High-speed RIB boats are an exciting way to explore nearby islands, including the ancient ruins of Delos, the self-proclaimed world’s first duty-free port; ferries also take larger groups of the public there. It’s a fantastic sight for anyone looking for a cultural experience.

Bottom line:  Prepare for wind; dress in layers; outdoor lovers should stick to the sea and beach. 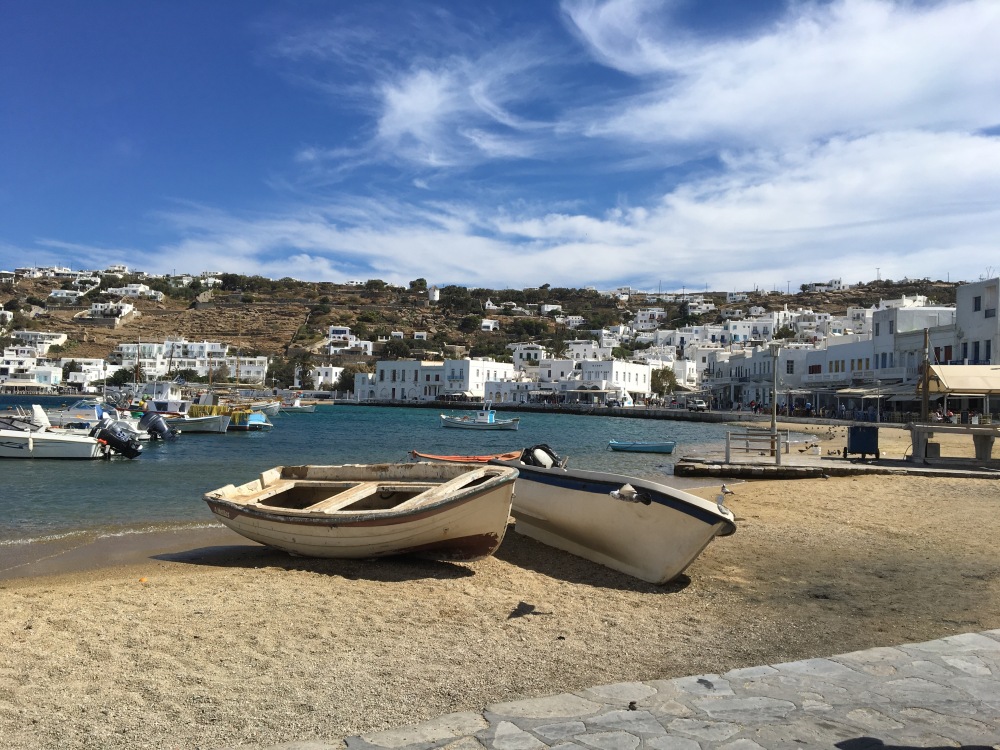 3. Mykonos town is the epicenter of the island
If you choose lodging near the town of Mykonos, you’ll find easy access to great restaurants, water excursions, and shopping. You’ll also be surrounded by tourists an day visitors from the numerous cruise ships and ferries that transit Mykonos’ port.  Ornos and Platy Gialos are nice alternative locales to town, each with family-friendly beaches and plenty of restaurant options – but both are close enough to town to get around. If you’re looking for a getaway, resorts outside of town are a good bet. Elia Beach, for example, is oh-so-close to town by water, but by land, it is a 20-30 minute drive on winding road. Elia and other similar beaches are best suited for those looking to avoid the Mykonos party scene. If  you choose to stay outside of Mykonos town, you may wish to rent a car, as taxis are not plentiful, and car services like Uber are nonexistent. Some visitors choose to rent scooters and ATVs, but I highly discourage it, as locals note the prevalence of accidents. If you find yourself in a trauma ward of a local medical center, that’s a bad sign. Especially when that means you’ll need transport to Athens for adequate critical care.

Bottom line:  To stay near all of the action, choose lodging within walking distance to Mykonos town. If you prefer to get away from it all, look outside of town! Don’t rely on taxis or scooters.

4. Mykonos has amazing food
The Greeks know hospitality. Their food, wine, and ambiance are unparalleled. The flavors of Greek cuisine, from surf to turf, are a highlight of any visit to Greece. Mykonos is no exception. While it IS a desert island and thus most ingredients aren’t produced or caught locally – with notable exceptions of cheese and seafood, Mykonos’ numerous restaurants compete for your love and money with near-perfect expressions of Greek and international cuisine. Stick to Greek food, or Greek-influenced fusion, and you won’t be disappointed. Stay away from the restaurants that try to lure you in from the street; the truly great ones need no advertisements.

A few recommendations:
Remezzo – Restrained when you want your waiters to be slightly snooty and sport man buns. In en elevated position by the water near the old port north of Mykonos town (within walking distance), it offers international fusion in an elegant setting.

Nammos Beach Club: Exclusivity galore! Where the wealthy and celebrities hang out. Snagging a beachside chair and umbrella will cost you, but be glad it’s not a cabana – their “Cabañas” are full-fledged four-walled structures made for special occasions, and they will cost upwards of €1,000 for a day rental.

It is arguably Mykonos’ best and most exclusive white sand beach, so for a true taste of it without extraneous costs, try a lunch at the club restaurant, which is lovely and airy in and of itself, but the food is fantastic. They make a mean risotto, as well as sushi and an incredible raw bar. You’ll feel like a million Euros after a meal and some people watching there.

Avra (photo above): A lovely “secret garden” spot in the heart of Mykonos town. Their immense menu combines Greek and continental dishes in a lovely setting that feels private and not touristy.

Alegro (photo above): Down to earth restaurant in little Venice. Relatively affordable, with great Greek and international dishes. Their complimentary Greek bruscetta and marinated olives will start your meal right! Try the kolokithokefthedes (zucchini balls – devastatingly good comfort food there), tzatziki, the seafood pasta, grilled octopus – anything really. We loved it so much, we are there three times in two trips. They have good, affordable Greek wines as well.
Elia Beach Restaurant – For those staying off the beaten path (or simply wanting to escape the crowds downtown), the casual open-air restaurant has a great selection of both Greek and international comfort food. Salads are good for those enjoying the lighter side. Their tzatziki is killer, and their Greek desserts are about as traditional as they come. Their baklava and sweet cheese pie are worth every calorie.

5. Mykonos is not a budget destination.
Certainly, good planning and a little restraint can make Mykonos less harsh on the wallet, but make no mistake, it is not cheap. If you don’t want to spend a lot, try a shorter stay before hopping somewhere else. Since the true island residents are few, you can’t use the tried-and-true travel strategy of going where the locals go. The inland village of Ano Mera offers more local color and has a few more than decent restaurants (Moussaka lovers unite!), but you’ll want a rental car to visit. Luckily, the Greeks believe in eating two big meals during the day, so if you fuel up at breakfast – which tends to be fabulous and included in most hotels’ room rates, you won’t need another full meal until dinner. In the meantime, Mykonos has plenty of cheap(er) fast food souvlaki, gyro, and crepe shops to tide you over.

6. Mykonos is tolerant
Why am I listing that, you ask? Allow me to put it delicately. If you are not comfortable seeing (or explaining to your children) sexuality on display, you might not wish to visit Mykonos. Mykonos developed an international reputation for tolerating what then were considered alternative lifestyles, starting in the 1960s. It was considered a safe haven for gay vacationers, and their fun, festive atmosphere continues to pervade Mykonos. For the most part, it is fairly subtle from an outsider’s perspective, but some of the window displays in Mykonos town shops might catch some tourists off-guard. Mykonos does host a few festivals during the season. Additionally, the island does have a few nude beaches, but most are secluded, and its patrons are respectful of those in the surrounding mainstream beaches.

Bottom line: Everyone just wants to have fun. Nobody is looking to bother anyone else’s fun, but they aren’t going to hide everything for fear of offending anyone.

7. Mykonos is known as a party destination.
Greeks love to party, and that atmosphere is also prevalent. The well-known nightclubs barely get started before 3 am, and sunrise is peak time at some of the largest, such as Cavo Paradiso, located a bit of a hike from Mykonos town near Paradise Cove and Beach. Cavo Paradiso, which often hosts A-list DJs and can hold up to 2,000 partiers, is so loud the bass almost seems to interfere with your heart rhythms. According to my Greek contacts, the party peaks at sunrise, after which its pool becomes a free for all for guests to enjoy a morning dunk before sobering up enough to drive back to town. Cavo Paradiso is one of the few locales on the island with a taxi stand, so it’s easier to hit than other out-of-town destinations. The late club scene translates to slower mornings in Mykonos town, and its shops are open relatively late for Europe (many remain open until 11 pm).

Bottom line: Prepare to shift your schedule a few hours later than you would at home. That’s true regardless of whether you yourself want to participate in the party scene!