I’ve found that I can visit any city in Europe and find menus that put the city, region, or country’s spin on dishes from throughout the continent. The more I travel, the more I notice the culinary influences of other countries regionally – as well as the styles and trends that now are commonplace at ‘international’ restaurants around the world. Go to Eastern Europe, and expect to see pork chops, duck, potatoes, root vegetables, and dill featured, but you’ll just as often, find foie gras and Bernaise sauce, micro-greens and mutton alongside the other ingredients. Pasta, pizza, and more distinct national dishes take on the eastern European treatment.

At Krakow’s Zielona Kuchnia, organic, fresh ingredients are superbly cooked in the Continental style, but with other flavors from around the world. I wouldn’t quite call that fusion, but instead an interpretation of a dish or incorporation of another cuisine’s style or ingredients.

Zielona Kuchnia is located outside of the old city, tucked back in an unassuming courtyard and with outdoor seating that I imagine to be an amazing respite during summer months. Indoors, the walls are cheery and white; decor is modern and minimalist with white and black striped accent pieces and fresh daffodils on our early spring table. 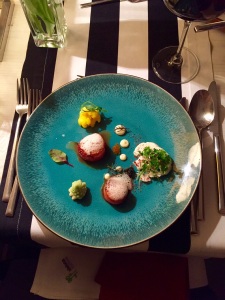 If you are a foodie, particularly one who enjoys the lighter and healthier side of food, you would happily savor Zielona Kuchnia. My friend ordered a bacon-wrapped scallop starter; it was so nice to have scallops perfectly cooked; they were a work of art with various colors of cauliflower, a foam, and orange and black caviar as shown above. 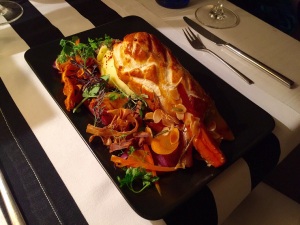 For a main, I ordered a tuna steak cooked rare and served over sprouted grains (lentils, peas, or chickpeas) with a balsamic reduction, watercress, and avocado crema. It was a dish that would be as equally at home in California as in Poland. After weeks of heavy food, I felt like I was nourishing my body and enjoying every bite without guilt. My friend had never tried Beef Wellington, so she did, and thus Krakow proved to be a great place to have a first experience with the very Anglican Wellington. Its crust was a bit thicker and heartier than I’ve been used to (more substantial than a flaky puff pastry) and also was stuffed with bacon, but the meat was tender; the pastry the right mix of softness and crisp, golden-brown exterior. We shared a bottle of smooth Spanish Rioja, which apparently was the right pick, as we saw other diners ordering the same. Lest one feel cheated on Polish flavors, I had a hard time turning down the roast duck, and the steaks are served with a Polish vodka sauce. Vodka makes an appearance at Zielona Kuchnia only in cooked dishes; the Polish staple is not available as a beverage, nor are other liquors. 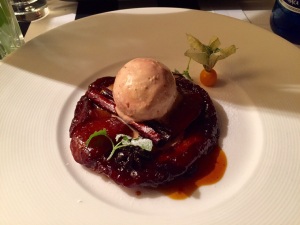 We lacked the willpower to turn down dessert; instead of sharing one, our indecision led us to end up with two. Zielona’s perfect version of French tarte tatin, the rustic and free-form apple tart that puts American apple pie to shame, was the best I’ve ever had, possibly edging out other versions due to a rum-heavy rum-raisin ice cream served with it. We also ordered their chocolate tart – a rich block of chocolate mocha decadence inside a shortbread tart shell. I’ve eaten too many chocolate tarts to count, but Zielona’s was well conceived and clearly made from good chocolate, coffee, butter, and/or cream.

The meal was so well-executed and fresh that I wanted to return. Though we did not have the opportunity to do so before we left, I would return in a heartbeat.