Just what really is Baltic cuisine, you ask?

Um…what and where are the Baltics? That’s what secretly you’re asking, right?  Isn’t that where they had that war in the ’90s? Like Serbia or Bosnia?

Nope.  But it’s an honest mistake.  Don’t feel stupid; we’ve all had those moments. And I totally was that kid who read maps for fun, which is just not normal.

Anyway, the Baltic States are Estonia, Latvia, and Lithuania:  three tiny countries best known in the West for being the first countries to declare their independence from the Soviet Union in 1991 (and whose names sound, not so wrongly, like charming fantasy kingdoms). They are located west of Russia and north of Poland, strategically on and across the Baltic sea from Finland and Sweden. 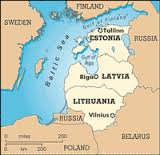 Their history is a not-so-charming series of occupations by foreign powers – Denmark, Sweden, German states, Prussia, Russia, Germany, and most recently, Russia (the USSR) again.  Since their independence, the three countries worked to establish themselves as legitimate nations and part of the European Union.  Today, their three capitals – Tallinn, Riga, and Vilnius – are striking combinations of old and new, from their medieval old towns to early 20th century architectural marvels to sleek, modern skyscrapers – all highly wired – even more so than the U.S. and western Europe.

I thought this was a food blog, you’re wondering.  I know, I know, geography and history lesson here (and I’m not doing it justice, I realize) does not equal food.  I’m getting there; this stuff is relevant, I promise. Because you can’t view Baltic food as something uniform or completely indigenous.  In the Baltics’ dishes and restaurants, you will recognize the influence of geography and history, and now, also globalization:  the invaders and the traders.

I had the pleasure of spending a nice stretch of time in the Baltics. I hate to do each country the disservice of overgeneralizing or simplifying, but I’d just like to summarize to start you in your culinary journey to these three countries.

I found the food scene in this region to be completely underrated.  Each capital has so many hidden culinary gems that the world hasn’t quite caught onto.  Perhaps it is because its foods bear similarities or hybridize in some way dishes made famous by other countries or cultures, or perhaps it is because it is hard to generalize in these rapidly globalizing countries.  Or perhaps everyone that visits is so distracted by the three capitals’ charming old town centers that they haven’t ventured far in their food adventures.

Though I definitely will go into more detail in future posts, I’ll sum up traditional Baltic cuisine:  more meats and less fish than I expected – beef, duck, and venison are menu staples in the nicest restaurants; black bread so addictive I can’t say enough about it; mushrooms; pumpkin; beets; and sour cream.  Enter the influences of European and global trade, and you get wonderful fusion dishes.

As they definitely are not isolated destinations, all three capitals also add their flare to cuisines from around the world – continental European, Italian, Chinese, Turkish, Russian, Armenian, Uzbek, Asian, and even Tex-mex for starters.  Texans are everywhere!  Additionally, I found a surprisingly wide availability of vegetarian, vegan, and even paleo-friendly grocery products and restaurants, particularly in comparison to western Europe.

I hope I’ve piqued your curiosity to learn more about the many food finds and adventures to be had in the Baltics.  Join me on a trip over the next few weeks to the Baltic region!