In life, we are faced with pivotal moments that define us, inspire us, and help us see ourselves and our world in a new light. While this blog obviously seeks to do this through the shared experiences of adventures in food, drink, and culture, this post takes that theme in another direction. Today, I share with you the awe-inspiring experience I had in a trapeze class in West Oakland, CA and the resulting lessons I learned about life.

I wrestled with the idea of deviating too far from my theme; I mean, the blog is the CULINARY Diplomat (AKA the art of cooking, whether it’s mine or someone else’s). I’ve broadened that notion to include beverages too, but a high-flying, adrenaline pumping trapeze catch? I finally told myself that it’s my blog, and I can post what I want! This experience provided me some much-needed inspiration, a sense of achievement, and some real life lessons. So here I am. I choose to share this experience with you readers, hoping you’re reading this because you’re already open minded, and because it made me look at my path in life, and most centrally, the concepts of fear and trust, much differently afterwards than before I set foot in that gym. These days, in light of so much complexity, hate and tragedy highlighted in our world, couldn’t we all use a personal victory? Couldn’t we all be inspired to do better, be better?

When a friend asked if I’d be willing to give trapeze class a try, I shrugged and said “sure.” I’m always up for a physical and mental challenge and a new adventure, so I was excited to give it a try. Having hit a milestone birthday this year also might have motivated me to test my own physical and mental limits. But I really had no idea what I was getting myself into. If you want to see the short version of a first-timer’s experience, watch the Sex and the City season 6 episode, “The Catch.” It’s a nicely condensed summary of the real experience of trapeze.

In my real-life existential experience, the school, Trapeze Arts, was located in West Oakland, which is well known to Bay Area locals as a not nice neighborhood, especially when a random shooting took place at the rapid transit (BART) station a few months ago. It offers ostensibly low enough rent to support a warehouse-turned gym.
Inside, I was reminded of my days as a competitive gymnast.The gym’s centerpiece was the trapeze net, bookended above by two towering trapeze platforms. A group of flyers were finishing their workouts from the previous session. They were impressive, and watching everything from simple catches to awe-inspiring twisting layout (flip) catches. I certainly hoped none were beginners!

We started practicing the basics on a 6′ high bar over an 16-inch mat, instructed by an Argentinian who had just arrived in the US and apologized for his (charming) stilted English. I did one practice of knees up and over the bar and a release. I rehearsed the bar grab at floor level. And then it was time to climb the platform and give it a go.

To say that platform was much higher than it looked from the ground is an understatement. It was terrifying. After a teenaged girl took her turn, it was mine. I was harnessed by one of the instructors. He hooked the bar, and I winced as I released my grip on a wire supporting the platform to grab the trapeze with my second hand. Thankfully, the harness held back the momentum, and I positioned myself, waiting for the command to jump.


And I jumped, blindly into the abyss, hoping my grip would hold. I had a moment of tunnel vision (and audio) and couldn’t quite register the primary coach’s instructions below. I swung back and forth, kipping a bit as I’d learned as a gymnast and as I’d seen some of the more experienced flyers do. And then I heard yelling from below at me not to swing. Oops.

Next, he called for me to put my knees up. Wait-what? Already? I thought that wouldn’t happen right away. Stunned, I did as instructed. It was a bit awkward getting my knees up and hooked over the bar, much less graceful than I’d hoped. But suddenly I was upside down.

He called for me to release my hands. Come again? Already? I let go and reached forward. And physics took over, and I hung from my knees – still alive! Hands finally returned to the bar, and knees and feet went right-side up. I got the call to release, and plopped to the net. A rush of adrenaline and a sense of accomplishment ensued.

I repeated that sequence once more, still shaking with fear, but more confident and better able to follow instructions. Lest I fall into any sort of comfort zone, the instructors told three of the four of us newbies to move on (a frightened young Australian woman refused to give the knees up a go, and thus ended her date with the trapeze). This time would include the previous sequence, followed by a release and flip, guided in the harness.

That release move was something I knew all too well from my childhood, and yet all I could think of now was the crazy (rare) injuries. I was the first in line to try it, yet my fear got the best of me. I released, feeling a twinge of regret and failure. Watching my fellow beginners, I realized it was much simpler than the gymnastic version. The lead coach explained to me, “Trapeze is all physics. Gymnastics is physical strength and timing. You’re used to doing the work. With the trapeze, it’s all physics. Just listen to my timing. Physics will take over.”

Yet my adult life has been trying to teach me that I – and my development personally and professionally – are dependent upon others in my life, on my circumstances – more than I’d like to admit. But when presented with choice, I can choose to listen or disregard. I can choose guts (risk) over fear and trust myself – and also those who guide me.

So I chose to listen and press on. I completed the release move, which was incredibly easy, taking virtually no physical ability (except me knowing from experience at which part of a flip to open up).

And now it was time to move on again. Time to attempt the catch that eluded Carrie Bradshaw. On the ground, the lead instructor repeatedly told us, “You are not doing the catch. You reach out and wait for Andrew to catch you.” 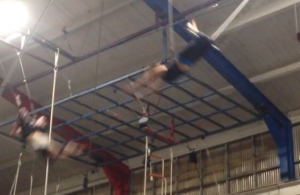 I was up first of the newbies. I felt like I was literally flying blind, but I decided just to listen. Just to go for it. One instructor was seated and swinging away on the opposite trapeze like an enthusiastic child on simple backyard swing. He and the instructor on my platform exchanged “listo”s, and then they called “ready” to me. I jumped and proceeded to hook my legs on the bar as before. This time, I released, arching and reaching. The instructor, Andrew, and I made contact. I felt his grip, released my knees, and I was flying safely. I released, elated. I made the catch! Ok, minor point: I let myself be caught. I just got out of my own head and shut out my fear. 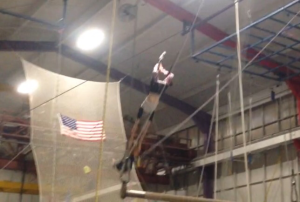 In hindsight, the catch was the easiest and most comforting part of the sequence. It was extremely nice to leave the hard part to someone else, to trust. That night, I left with the giddiness of Childhood Me learning a new skill or winning a medal at a meet. It was the feeling of personal triumph, but as the experience sank in, I reflected at how this experience seemed to be a metaphor for life.

I was fortunate enough to have the opportunity just to try the trapeze. But once I showed up, it was my choice whether to take a risk and trust the instructors – and to trust myself. I could have given up. I could have seen the view from the platform and just backed down. I could have not listened and not attempted the flyaway, not attempted the catch. But something made me listen, trust (with a healthy dose of fear and adrenaline remaining), and literally let go of that bar, of that fear. And it felt great!

When I walked in that night, I had no idea that I would complete three successful catches on my first session. I would have never done so if left to my own devices. The instructor on the ground pushed me, the instructors up high supported me and encouraged me as if I had no alternative but to succeed. And the results spoke for themselves. It truly was all physics, not physicality. It was all attitude and mental courage.

In psychology, there’s a phenomenon called the fundamental attribution error. We are more likely to attribute behaviors in others to personality and to attribute circumstances for our bad behavior. Taking it a step further, we are more likely to give ourselves credit for our successes and yet see others’ successes as a result of circumstances. Wow.

From my trapeze experience, I wanted to immediately praise myself for doing something daring. But as the lead instructor pointed out, from a sheer physical standpoint, it’s all physics and not one’s own physical ability. It boils down to getting out of your own way mentally to Just Do It. Trusting the person on the other side to catch you. Trusting yourself enough to let go. And allow the physics to do the work.

Isn’t that true in life – for all of us? Couldn’t we all show a little courage? It is so much easier not to try something risky in life, to give up safety in our comfort zone. But those who end up making the most out of life – our heroes, (good) leaders, entrepreneurs, advocates and activists – all have something in common. They stepped out of their comfort zones, daily, if not in one meaningful, impactful instance. How do we know our capabilities, our limits, unless we test them?